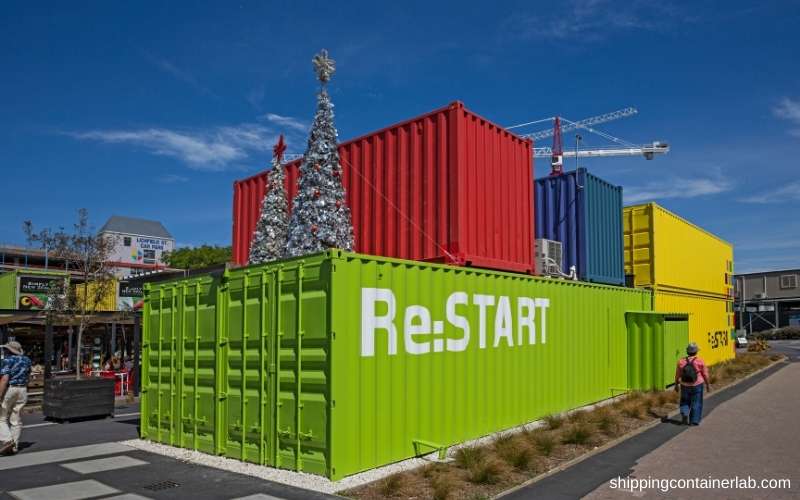 The Christchurch shipping container mall was built in 2011 after a devastating earthquake levelled the city*.

Designed to entice shoppers back into the hard-hit Central city, the shipping container mall on Cashel Street, by the banks of the Avon River was named Re:Start.

Re:Start was both a noun and a verb, as Christchurch was quite literally starting again, after a huge percentage of the buildings in the city were either destroyed in the earthquakes, or deemed not economic to repair.

With businesses facing ruin, the temporary mall built in just 6 months brought hope and pragmatism to a city that had suffered greatly.

Opened on the 29th of October, 2011, the Re:Start mall consisted of a series of shipping containers painted in bright colors, stacked for impact.

It opened next to Ballantynes, the premier department store in the city. Ballantynes was seen as “an anchor” for the Re:Start mall retail precinct.

With a combined 27 businesses, the container mall was a place for locals and tourists alike.

Arranged in a laneways style, there was plenty of space for wandering and window shopping.

The Christchurch container mall was a joint initiative built by Leighs Construction and Buchan Group and put the South Island city on the map, with Lonely Planet including Christchurch in it’s top 10 cities to visit in 2013.

It was bold and visionary, daring in a way that only a city on its knees could pull off.

Why did they use shipping containers?

Shipping containers weren’t the first idea off the bat.

During a media tour of the destroyed city which was still experiencing frequent aftershocks, a journalist asked where would be the best place to take shelter were an aftershock to occur during the tour.

After the shipping containers arrived from China, they were painted bright colors, inspired by a Mexican village.

Why was the shipping container mall in Christchurch closed?

As land began to be cleared to make way for permanent buildings, the Re:Start mall shrank in size and was eventually replaced by the new Riverside market.

Originally intended to be open for just six months, Re:Start survived (and thrived) for more than six years before being permanently closed on 31 January 2018

This article was written by a family member, who personally visited the Re:Start mall many times.